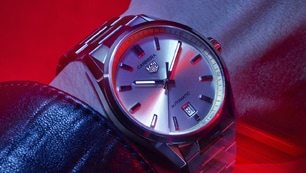 CONNECTING PAST AND FUTURE

Whether the enthusiast prefers a silicon chip, a tourbillon or a carbon hairspring, their watch connects TAG Heuer’s past and future.

2015
The Connected Watch
In November 2015, TAG Heuer introduced the first Swiss luxury smartwatch, the TAG Heuer Connected watch. Residing in a TAG Heuer Carrera-style case, the Connected watch incorporated newly-developed technology from partners Intel and Google. Purchasers would be able to exchange the Connected watch for a TAG Heuer Carrera with a traditional mechanical movement. The Connected Modular series (2017) allows the wearer to switch the smartwatch module to an automatic watch module, using the same strap and lugs.
2017
The Autavia Returns
In March 2017, the style of the new Autavia had been selected by enthusiasts, choosing between 16 classic Autavia models in the “Autavia Cup” competition. Limited Editions of the Autavia have marked Jack Heuer’s 85th birthday and paid tribute to Swiss Formula One hero Jo Siffert, while other models have used color schemes from the “Viceroy” and “Orange Boy” Autavias. In September 2017, TAG Heuer collaborated with its community of vintage collectors to present exhibitions in 10 cities around the world. There were over 400 watches on display, half from the TAG Heuer Museum and half from individual collectors. Each city had its own theme, ranging from cars and drivers, to military watches, to sailing and diving.
2018
TAG Heuer Carrera Fragment
The limited-edition Fragment Design TAG Heuer Carrera marked the debut of the Heuer 02 in-house movement in a TAG Heuer Carrera case. This movement uses the 3-6-9 layout of Heuer’s classic 1960s chronographs, and delivers 80 hour power reserve. Designed by street wear legend Hiroshi Fujiwara, the Fragment Design TAG Heuer Carrera drew inspiration from a rare three-register TAG Heuer Carrera produced in 1968.
2019
Monaco Fiftieth Anniversary
To mark the 50th anniversary of the Monaco, TAG Heuer offered a series of five limited edition models, each reflecting the style of a decade. There was Olive Green for the 1970s, Victory Red for the 1980s, Industrial Gray for the 1990s, Black and White for the 2000s, and Deep Gray for the 2010s.

Get early access to our latest watch releases and news.