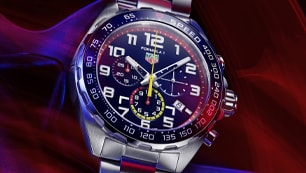 Back to Vintage main menu

The Titanium Collection marked an interesting moment for Heuer. The success of the brand’s dive watches from 1978 to 1983 positioned the company as a survivor of the 1970s, a decade that saw the demise of many leading Swiss watch brands. Heuer celebrated its 120th anniversary by creating the “Golden Hours” collection, based on its classic models, and also by looking to the future, with the new Titanium Collection. This new range used titanium, the “Space Age” material of the future, in a line-up of premium watches and chronographs, that also incorporated the high grade components (such as the quartz and mechanical movements and sapphire crystals). TAG Heuer produced the Titanium Collection for only a few years, but the company would continue to build on its approach of using state-of-the-art technologies and materials to offer the very best watches and chronographs for enthusiasts.

Flipping through a Heuer catalogue from 1983/84 offers an interesting perspective on a company that was in the midst of a transition. Heuer had introduced dive watches in 1978, and five years later was offering the Series 1000, 2000 and 3000 collections, with a wide range of watches and chronographs, from traditional style of dive watches to models that incorporated more modern colors and angles. Heuer continued to offer its more traditional mechanical chronographs, as the Autavia and Carrera collections were reaching the end of the road, being replaced by the “Series 1000” chronographs. With Lemania included in the ownership group that had purchased the company from its founding family, in 1982, it is not surprising that the Lemania 5100-based movements were taking the place of the Caliber 12 (Chronomatic) and Valjoux 7750 movements.

Toward the back of Heuer’s 1984 “Time for Action” catalogue, we see two interesting sections. The “Golden Hours” collection included Heuer’s most luxurious models for collectors, a variety of 18 karat gold chronographs and dive watches, as well as some pocket watches. If the “Golden Hours” collection celebrated the company’s glorious history, the last section of the catalogue reflected the company’s optimistic view of its future. In presenting its new “Titanium Collection”, Heuer presented images of the Space Shuttle (which made significant use of titanium) and declared that this “Space Age” metal would be an important material for its future. Heuer stated that these were the watches and chronographs for action, now and in the future.

Indeed, this represented a moment of celebration for Heuer. While many Swiss watch brands had been the victims of the challenging industry and economic events of the 1970s, Heuer’s tremendous success with dive watches in the recent past, on top of its 120 years of success in chronographs, stopwatches and other timing gear, had allowed it to survive. But beyond this baseline of survival, Heuer was developing the watches that would position it for success into the 1990s and the 21st century. The Titanium Collection of watches and chronographs was symbolic of this exciting future, as Heuer would move beyond the traditional materials used for watches ,stainless steel and gold, to the material of the future.

The Heuer “Titanium Collection” was launched in 1983 and marketed as having “space-age” technologies -- a case and bracelet made entirely of titanium and, on some models, carbon fiber inserts on both the case and the bracelet. The “space age” offered strong imagery circa 1983: the Space Shuttle Columbia that first flew in 1981 was pictured in Heuer’s sales brochure, next to the new titanium watches.

The Heuer Titanium Collection was comprised of three models, but we see a broad variety of executions. There were three-hand watches, as well as chronographs; bezels were either fixed or rotating; movements were automatic or quartz; accents were either gold or carbon fiber (black); and the logo on the dial was either “Heuer” or “TAG Heuer”. An overview of the collection is as follows:

Each of these three models came in three versions – a men’s watch, a women’s watch and a chronograph.

Dials on the Titanium Collection were anthracite in color, with Heuer remarking that their brilliance was matched only by the shine of the titanium. The Titanium watches featured Arabic numerals for 6-9-12, with a date window at 3 o’clock. The chronographs with the fixed bezel had the Arabic numeral “12” at the top of the dial, while those with the rotating bezel used geometric markers for the hours. All the chronographs had a date at 3 o’clock, with a tachymeter scale printed around the edge of the dial.

Heuer’s use of a sapphire crystal for the Titanium Collection was another look toward the future, as most previous and contemporary Heuer watches and chronographs used mineral glass. Sapphire crystals offer a far greater hardness and scratch resistance than mineral glass crystals, though the cost to produce them is significantly greater.

The watches and chronographs in the Titanium Collection were sold with matching titanium bracelets, with the gold or carbon fiber (black) inserts on the bracelet matching the accents on the case. These were not integrated bracelets, so that the owner could switch to a traditional leather strap.

Using the “Space Age” material for the cases, as well as Heuer’s best movements, more expensive sapphire crystals and other top components, the Titanium Collection was positioned as a premium series of timepieces. Heuer’s price list from 1984 shows that the three-hand watches in the Titanium Collection were priced from $1,045 to $1,245 (depending whether the accents were carbon fiber or gold), while the quartz chronographs were priced at $1,525 and $1,800. At this time, Heuer’s traditional mechanical chronographs were priced in the range between $195 and $595, while most of the 2000 Series Quartz Chronographs were in the range between $500 and $670.

In 1985, TAG Heuer released a limited edition of the Titanium chronograph in honor of Brazilian Formula 1 champion, Emerson Fittipaldi. In 1972, at age 25, Fittipaldi became the youngest Formula 1 champion, driving the John Player Lotus 72 and won a second championship in 1974, driving the McLaren M23. He left the McLaren team at the end of the 1975 season (where he was runner-up) to join his brother’s team. That move proved to be unsuccessful, and after five tough seasons that brought only one podium, he left Formula 1 at the age of 34. After a four-year break, Fittipaldi returned to open wheel racing in 1984 in the CART series, where he won two Indianapolis 500 races, the last in 1993 when he was 47.

The Fittipaldi Titanium was released in 1985, one of the last watches with Heuer on the dial. The Fittipaldi limited edition had the name “Fittipaldi” printed on the dial, and was a quartz chronograph, with a fixed bezel, and gold accents.

The movements used in the Titanium Collection were quite advanced for the time, especially the chronograph movements.

The movement in the quartz chronograph was Heuer’s Calibre 185. This is a “mechanical quartz” modular movement: an ESA 555.232 quartz module, with a Dubois Depraz mechanical chronograph module mounted on top.